1,775 views
8 min read
Over the next few years, the work you’re doing now will change or disappear altogether. Use these 9 strategies to think, learn, and adapt your way to volatility and disruption. From mindset, learning less, using mental models, right through to developing the ability to unlearn.

Future-Proof Yourself In An Age Of Disruption: 9 Techniques To Achieve Learning Agility

This prediction from Futurist Alvin Toffler is fast becoming our reality. So, how do we prepare for our brave new world?

Latest evidence-based research and popular books around learning tend to focus on the development of memory strategies to increase knowledge retention. This is a significant contribution, particularly since most people’s understanding of how we learn and think is rife with myths and misinformation.

The most typical example is the mythology around learning styles, which I like to address with this image (for a larger view, right click on the image and select ‘open in a new tab’): 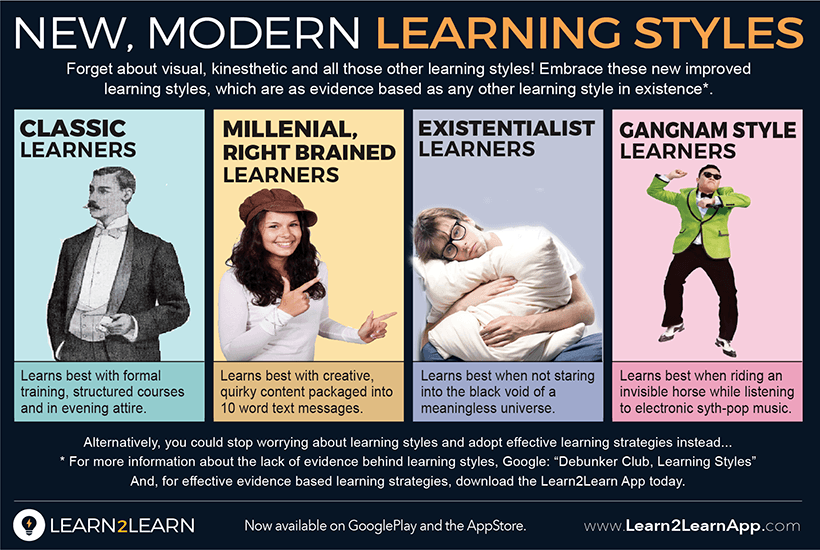 In the context of so many brain myths, popularizing evidence-based strategies such as spaced learning, retrieval practice, interleaving, and other counter-intuitive study techniques is a welcome addition to the conversation.

But it’s only just the beginning of what’s required.

Adapting and thriving through this period of accelerated change requires higher levels of learning agility. That means improved higher-order thinking, problem-solving skills, and creativity, as well as the ability to quickly learn and apply complex skills in varying situations.

Essentially, it means becoming a powerful agile learner, which you can preview in the image below. 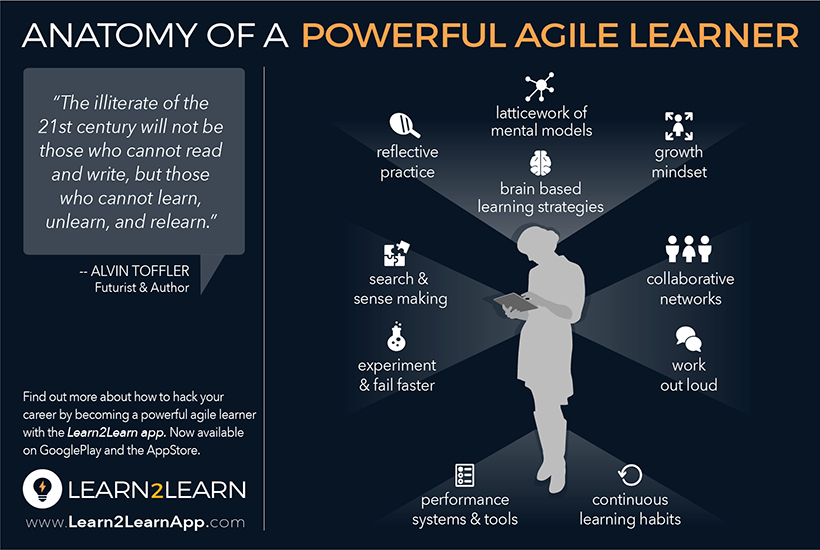 Perhaps the least surprising strategy is to bring awareness to, and invest in, mindset. Stanford University Professor Carol Dweck has popularized the importance of a growth mindset which allows us to embrace challenges and constantly develop.

Other related and powerful attitudes include:

Mindsets can be complex beasts to shift. Bringing compassionate awareness to our internal voice is an excellent start but it will generally require cycles of effortful action and reflection to achieve lasting change.

Here’s an example of how to develop one of these aspects, in the form of curiosity. 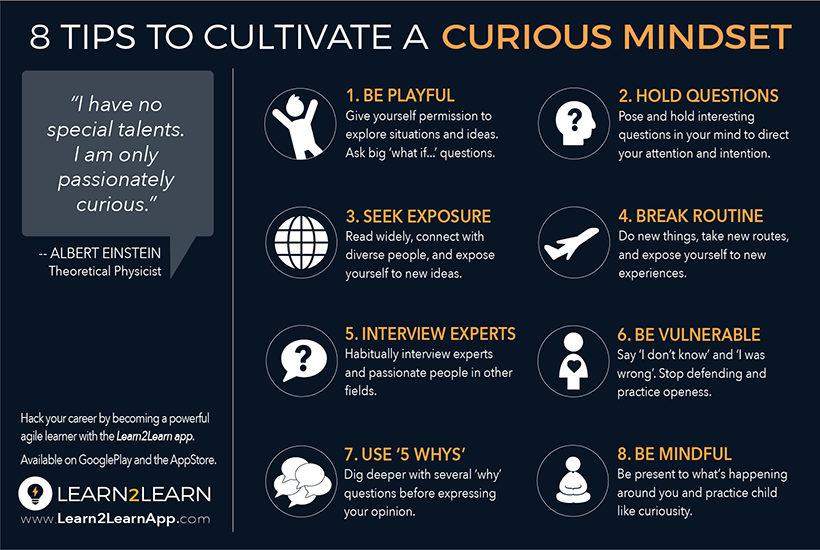 We live in an era where a child with a smartphone can out-fact a Mensa convention, so why not embrace opportunities to ‘extend our brains’ with technology? For example, rather than memorizing directions, we simply need to remember where we’ve left our phone (i.e. our GPS) and this wonderful performance tool will help us reach our destination.

Other performance tools can be low-tech, like the checklists championed by the surgeon and author Atul Gawande, or high-tech, such as searchable knowledge bases, or chatbots. Either way, they provide just-in-time support, allowing us to achieve more while learning less, as captured in the following cartoon. 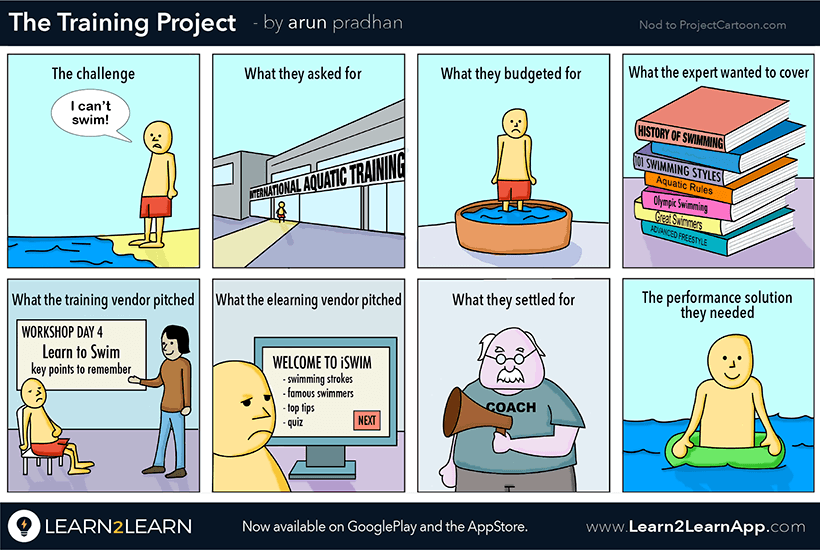 In today’s constant state of information overwhelm, embracing such techniques isn’t just a matter of a convenience, it’s a matter of necessity. By being strategic about what we commit to memory, and reducing cognitive load in the process, we provide space for deeper thinking, which leads to the next point.

If we use those memory techniques I talked about earlier for anything, it should be for learning mental models.

Mental models are conceptual frameworks that help us understand and act in the world. From metaphors like ‘desktops’ on computers to frameworks like GROW in coaching, such models act as short-cuts, allowing us to quickly understand and engage with the world.

Charles Munger, Warren Buffet’s right-hand man, has literally made fortunes from taking the big ideas from a range of industries and incorporating them into his ‘latticework of mental models’. Rather than having a single cognitive tool to cope with challenges, striving for such diversity broadens out our cognitive toolkit and ability for divergent thinking.

Entrepreneur and investor, James Altucher, takes this further with his concept of ‘ideas sex’. His argument is: “Become good at two or more areas, intersect them in a unique way, and now you are the best in the world at the intersection”.

So, how do you pick up mental models?

There are many methods, including exposure to diverse experiences, ideas, industries, and people. Once you’re engaged with learning a new concept, one of the most deceptively simple techniques you can use is the Feynman technique (and I prefer using it with my own addition of ‘Myrtle’, as described below): 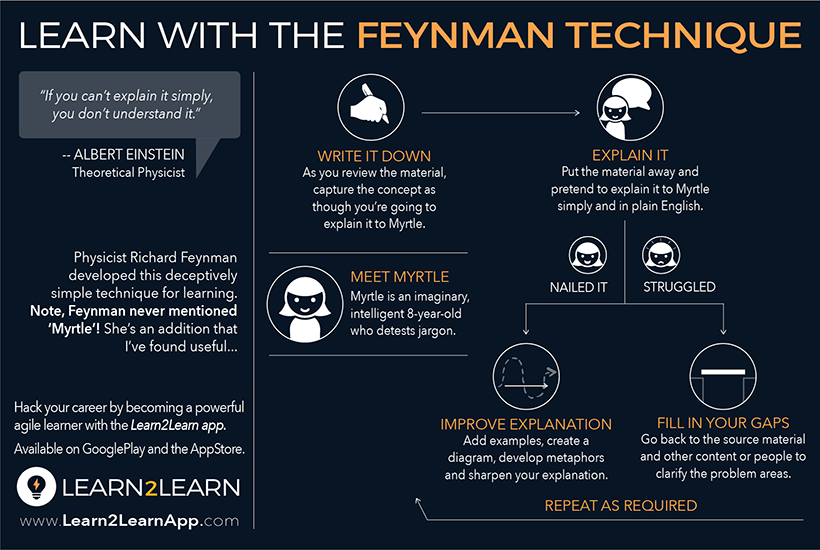 4. Be Conscious Of The Unconscious

Tacit knowledge refers to the understanding, beliefs, and lessons we’ve absorbed, primarily through experience, that cannot easily be put into words. In his best-selling book Blink, Malcolm Gladwell described benefits of deep tacit knowledge, citing examples of art experts who can ‘sense’ fake artwork. The negative side of this was explored by Daniel Kahneman in Thinking Fast and Slow, where he unpacked the nature and mechanics of unconscious bias.

This is a complex topic, but the main takeaways are to be aware of our biases and know when to adopt ‘slow thinking’ to take a more considered view. It’s walking the tight-rope of using tacit knowledge in areas where we have experience and expertise while being aware that such shortcuts are inherently prone to bias.

Speaking of biases, one of the big ones is ‘confirmation bias’ or the tendency to find and interpret information that reinforces our current beliefs.

The Kodak story is a classic example of a business which couldn’t unlearn in the face of disruption. You’re probably aware of other examples of individuals living in denial about their changing reality until it was too late for them to adapt.

Letting go of deeply held mental models is one of the most challenging aspects of learning agility. There are a number of techniques that can support effective unlearning, some of which are captured in the following infographic. 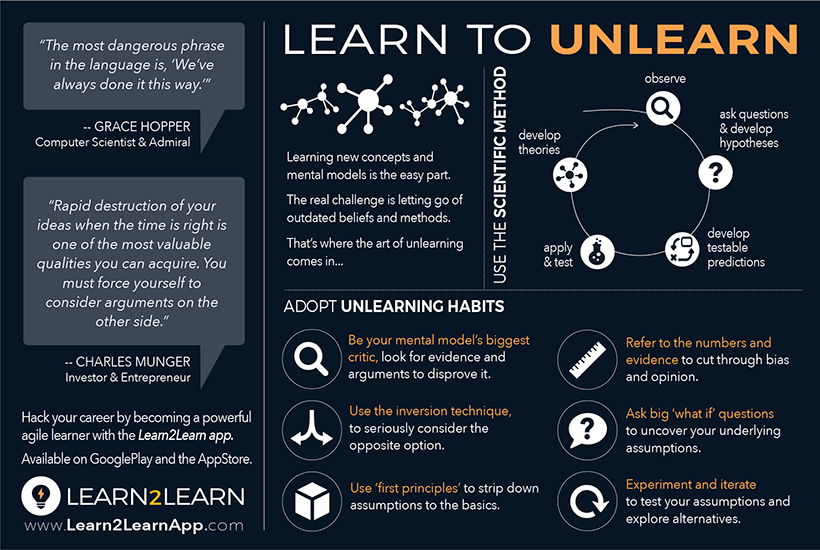 In Outliers, another best-selling book by Malcolm Gladwell, he popularized the idea that it takes at least 10,000 hours to become an expert. Since then, Anders K Ericsson, the researcher behind this claim, has published Peak, his own compelling book, to stress that developing mastery is less about time and more about deliberate practice.

In contrast to mindless repetition, deliberate practice includes seeking expert feedback to identify and practice our weak spots in relation to our goals.

Just as performance tools ‘extend’ our brain, developing an extensive collaborative network extends and develops our capability. In our new and increasingly complex world, ‘know who’ and the ability to draw on diverse networks for support, is a game changer.

There are a number of aspects to this, from working effectively in a team, fostering a community of practice, and engaging with broad networks. One approach that assists with all of these groups is ‘working out loud’. This technique championed by the likes of John Stepper involves sharing our work in progress, actively contributing to others, and developing meaningful collaborative relationships as a result.

Working with ambiguity requires cycles of exploration, testing, and learning. This includes rapidly prototyping ideas to quickly test assumptions and understand our audience, situation and/or challenge. A key aspect of such experimentation is understanding that failure is part of the journey as we stretch beyond our comfort zone to accelerate our learning and impact.

This is a huge topic which I’ll explore in a future article. It’s been greatly informed by the work of people like Amy Edmondson and the investigation around psychological safety as a key factor to support a culture of learning and high performance.

A significant part of this is to end the ‘blame game’ and provide a context where failure is identified and talked about without shame. 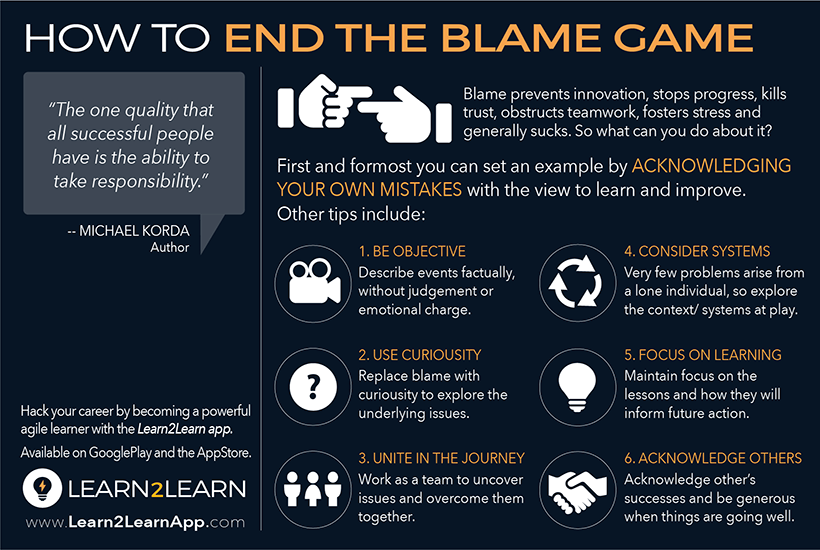 In The Power of Habit, Charles Duhigg outlined 3 elements of habit formation as a cue, routine, and reward. Leveraging such behavioural loops are crucial to embed change because we know that motivation generally doesn’t last.

Stanford University’s B.J. Fogg developed this into his argument for ‘tiny habits‘ which consist of daily, low effort actions tied to cues such as having a shower or buying a coffee. Choosing cues to prompt short reflective moments will provide the time and space for us to better learn from failure, shift mindset, and abstract experiences to develop and combine mental models.

Other ways to improve reflection are explored in the following image. 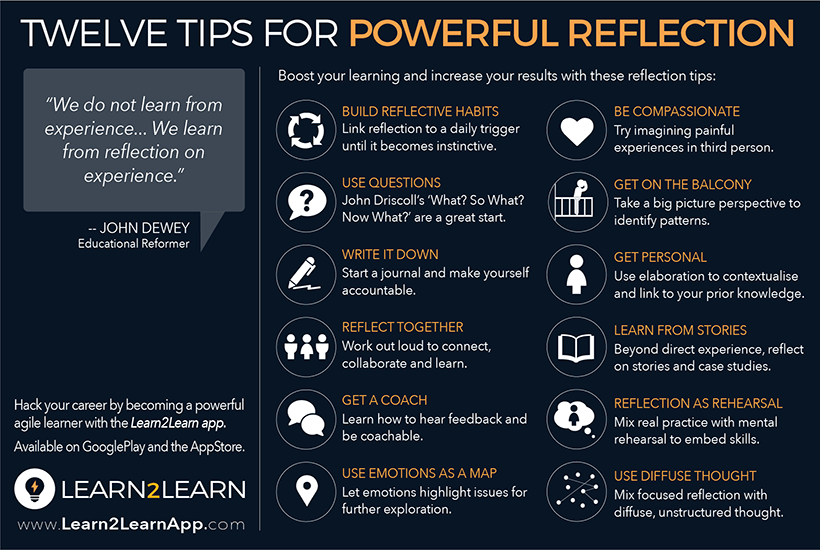